Super City is in Peril - And Only YOU Can Save It!

Or destroy it. Or make it up. Or just try and survive it. It all depends on which side you're on... 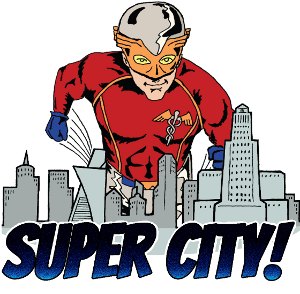 Super City is a fun, fast-paced party game of secret identities, secret agendas and secret alliances. Jump headlong into the daring and dangerous world of Supers, Sidekicks and Villains and test your wits and skills against your foes. But be wary, crime fighter! You never know exactly WHO they are...


What Is This Game?!

Similar to the popular party games "Mafia" and "Werewolf" (but with some major twists), Super City takes the action and intrigue into the world of comic book supers!    Players take on the role of a hero, villain or ordinary (or not-so-ordinary) citizen and secretly try to discover the identities of other Players.  A Narrator guides the action and drives the storytelling as plots thicken, alliances rise and fall and betrayals and miscues run the table.  Served up in a tongue-in-cheek style with plenty of room for humor and suspense, the game is a guaranteed hit for groups of all ages and experience levels.  Perfect for youth groups, parties, hangouts, game nights and anywhere else people gather, Super City is an awesome addition for any event where fun is the goal.

Posted by Chris Weedin at 12:08 AM No comments: