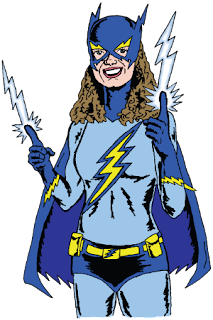 Backstory
The young teenage daughter of Blue Lightning, Holly was born just a year after his accident and soon demonstrated reduced levels of Carl's own powers. Inheriting also his boldness and resolve, she would not relent until he allowed her to tag along on his missions. She now joins Blue Lightning on his heroic crusades against crime as his sidekick and namesake... Lightning Girl! 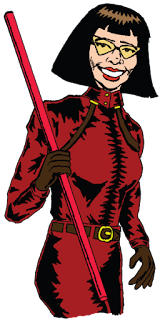 Backstory
Emerging from obscurity only a few short months ago, Yui claims to be the great granddaughter of the original Sleeper's war time nemesis General Kurosawa. Calling herself Karate Red, she begged Ripley to allow her to serve as his sidekick, in order to right her great-grandfather's wrongs. Using her martial arts expertise and mysterious staff, she has proven a valuable ally. In spite of this, a dubious Sleeper continues to watch her closely. 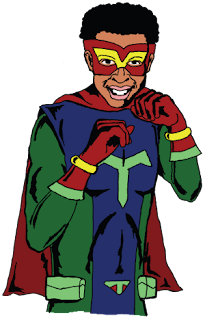 Backstory
Caught in the crossfire during a vicious battle between Captain Mercury and Professor Gunn, young boxing student Ron Carver was struck by a ricochet from the Maxx Gunn off Mercury's helmet. The strange reaction of the two transformed Ron's muscles into iron hardness! The fledgeling hero went on to save Mercury, who was incapacitated by the blast, earning himself a place at the side of the helmeted hero. Now the two fight crime together as... Captain Mercury and his sidekick, Tough Kid!