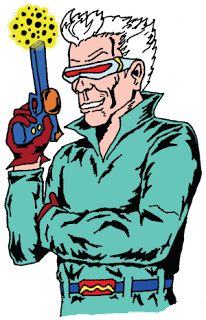 Backstory
A megalomaniacal genius with off-the-charts IQ, an ego almost as big and an utter lack of conscience, Maxwell Gunn was destined for a life of crime. Driven by dreams of world conquest, he hovers on the edge of insanity and brilliance as he pursues his mad schemes. Unmatched in his powers of invention, Professor Gunn frequently meddles with dangerous and unpredictable forces beyond the realms of normal science. Although his devious creations are numerous, he favors his signature Maxx Gunn which employs a variety of settings and energies, both destructive and unpleasant.

Backstory
A man of few words, Doctor Dynamite lets his explosions do the talking. Completely devoid of compassion, this cold, ruthless psychopath has only one joy in life – destruction. Fascinated from childhood with the thunderous noise and earthshaking power of explosives, his life has been a relentless and unceasing drive for bigger and badder booms. Dynamite hires out his talents when necessary for robberies, assassinations... or worse. 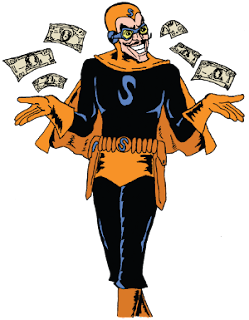 Backstory
Long overshadowed by a mysterious and sinister force known only as “The Malevolence”, Viktor turned to crime, chaos and villainy at an early age. The Malevolence seemed almost to guide him, sometimes acting with purpose and sometimes at random, causing mishaps, misfortunes and accidents from minor to lethal. Although unable to control this force, Viktor has an uncanny ability to sense and exploit it, always to his benefit and to the harm of those around him, earning him his identity as... the Sinister! 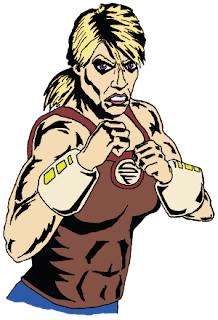 Backstory
Seeking greater prowess in the ring, Russian lady wrestler Ludmilla Kuznetsov turned to science – the dangerous, unpredictable, unstable kind. She became a voluntary test subject for the same unscrupulous scientists who would eventually inject the Seahawk's father and received an early and even less stable prototype of the same drug.  While it gave her tremendous powers, it also made her mentally unstable, aggressive and violent. After a fearsome rampage that destroyed the lab, she was recruited by the Russian mob in the 1960's and began her life of villainy.  She currently freelances as an enforcer and heavy hitter.


The Sinister used by permission of David Goehner.